About Us
Division
Products
Testimonials
Careers
Media Gallery
Contact Us 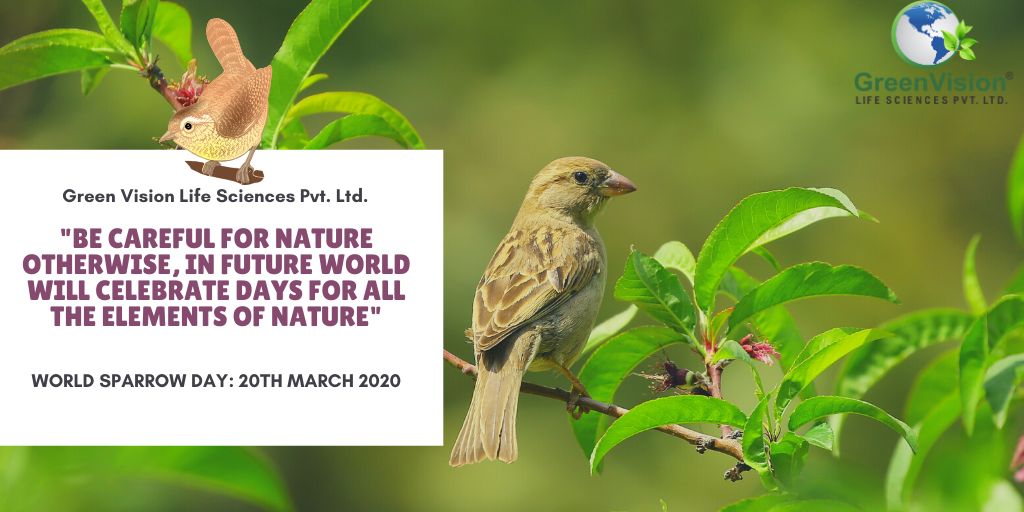 World sparrow day is being followed globally since 2010 on March 20th of every year. The idea is to embark a day for celebrating World Sparrow Day came up intending to educate the public about the menacing contaminated and polluted environment and also to draw attention about the house sparrow and threat to their population. Nature Forever Society of India with the joint effort of the Eco-Sys Action Foundation (France) and various other national and international organizations across the world intended to start this wide-ranging program. They majorly focus on encouraging the reorganization of common biodiversity, which extends a change from the typical awareness about the surrounding rare and exotic species.

We all can observe the sudden rate of sparrow declining has accelerated globally and also is very likely to become extinct in the near future. Sparrow though being tiny and sensitive, yet possess a strong immune system. Its sudden disappearances were indicating the warning to a human about the imminent environmental threat. Various supposition flutter in the exposition of why sparrows had started to evanesce. But everything boiled down to the elementary reality of expeditious mutate in the way of living style of humans. The excessive use of DDT, repellants, insecticide, and pesticide. The continuous encouragement of deforestation, increasing radiations, lack of food/water, and also not visualizing the effect of not maintaining ecosystem biodiversity was the major reason for sparrow deserting. Rachel Carson an American book writer also has drawn attention to the impact of DDT on bird populations. Carson had written the book called “Silent Spring”. Her book revolutionizes many to ban DDT by the 1980s. In the book, she explained how these tiny bird species are coming into the phase of extinction. She emphasizes that due to the use of pesticides, habitat loss, climate change, and other threats we are experiencing the rate of birds declining globally.

The Sparrow Day commemorations started in the year 2010 in disposition to increase the awareness in the humankind about the viable extermination of the house sparrow in the ecosystem. We should not use something which is unbalancing and impacting our environment Theses Insecticide and Pesticides can contaminate soil, water, turf, and other vegetation. In addition to killing insects or weeds, these chemicals can be toxic to a host of other organisms including birds, fish, beneficial insects, and non-target plants.

Green Vision Life Sciences Pvt. Ltd. aims to go organic save our planet. We respect MOTHER EARTH and committed to maintaining her health & hygiene. We use innovative techniques for our wide ranges of products to solve the environmental challenges to sustain without impacting our fragile ecosystem. This Sparrow Day we wish you all to take a step forward to save the ecosystem and maintain its diversity: “Let’s Go Green Lets Go Organic”.